Park Ji Young, known by her stage name Kahi (가희) is a Korean Pop singer. She is the former leader of the girl group After School and the sub-units Unit ver. 2 and A.S. RED. She is also a former member of S.Blush. Kahi debuted as a solo artist in 2011 with the mini-album Dorawa Nappeun Neo.

In 2000, Kahi was chosen as the main dancer for DJ Doc's mega-hit, "Run to You", just three months after she entered. However, her instant success also brought her huge stress, and eventually forced her leave. To make a living, she worked many jobs such as working as a cleaner, waitress, and sales clerk for long period of time. Finally, a choreographer in SM Entertainment gave her a chance to become a temporary dancer for BoA. SM Entertainment liked her dancing, and she was kept as full-time dancer. Since then, she gradually gained fame in her field.

Her cooperation with BoA lasted more than three years. Besides BoA, she was also a famous backup dancer for Country Kko Kko, JinuSean, 1TYM, Lexy, Chae Yeon, Eun Ji Won, and many others. She was also the dance teacher for Son Dam-bi, May Doni, and Kim Jung Ah, her former bandmate.

Around 2006, after more than five years career as a professional dancer, Kahi decided to debut as a dance-pop singer. She joined the Korean American girl group "S. Blush", whose first digital single peaked at #2 on the Billboard Hot Dance Chart in May 2007. However, due to various reasons, the band soon disbanded.

In late 2007, Kahi contacted some friends in the industry that she had known from her years as a dancer, who are now the staff of Pledis Entertainment. They planned for and produced the debut of the new group together. After years of work and selection of members, she debuted in January 2009 as the leader of After School.

Pledis Entertainment initially announced that the singer would release a solo album sometime in 2010, which started rumors of her leaving the group. However her management denied that she was leaving After School. However, the debut was delayed to February 2011. Meanwhile, Kahi joined the cast of reality-variety series Yeongunghogeol (영웅호걸, "Heroes"). She was later cast in Dream High 2 playing a teacher at Kirin Art School.

As After School underwent many member changes and image changes, Kahi remained the leader. Soon, After School debuted in Japan and shortly after in June 2012, it was announced that Kahi would officially graduate from After School in September.

In March 2013, Kahi was rumoured to be having a solo comeback, but it was put on hold. Over a year later from her last solo release, Pledis Entertainment announced on September 25, 2013 that Kahi would be releasing her second mini album, titled "Who Are You?", on October 10.

As of 2014, Kahi acted as the lead role of Bonnie in the musical and Korean adaptation of Bonnie & Clyde (musical) along side ZE:A's Hyungsik. As of October, Kahi posted a picture on her SNS of the script for the musical All Shook Up (musical) which she appears to have gained a role in.

On January 19, a rep from Pledis told The Fact, "Kahi's contract recently expired, and she has left the agency.  There was no disharmony.  It ended on good terms.  We think Kahi revealed her stance on Twitter well.  We do not know what activities Kahi will pursue in the future at this moment, but we hope it goes well."

She wrote via Twitter, "'It has been 6 years since After School debuted.  That is also the amount of time it took to leave the agency.  You've helped me to realize my dream and raised me when I was lacking, so I'm really grateful to everyone in the Pledis family. Wherever I am, I will work more diligently with a more mature self.''

On 20 August, Kahi made an appearance in Andrew Pong’s debut track and MV, “Tonight”.

On March 14, it was confirmed that Kahi will get married this month with the well-known figure in the fashion industry, Yang Jun Moo. On August 1, Kahi's husband, CEO Yang Joon Moo, shared a picture of his wife the other day via his Instagram, announcing she's 24 weeks into her pregnancy now. The picture shows the expectant mother positively glowing and showing her little D-line. 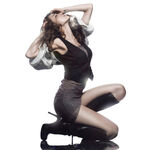 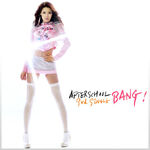 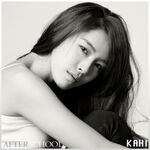 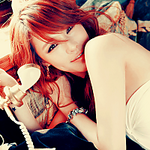