After School Wiki
Register
Don't have an account?
Sign In
Advertisement
in: After School, Orange Caramel, A.S. BLUE,
and 4 more

Park Soo-Young known by her stage name Lizzy (리지) is a Korean pop singer. She is a member of the girl group After School and of the sub units Orange Caramel and A.S. BLUE. She is also a member of the one-time unit Mystic WHITE. She made her debut in After School with the release of their third single "Bang!".

Before her debut, she was first seen performing Fin.K.L.'s "To My Boyfriend" with the group during one of their showcases in early 2010.

For a time she became the youngest member of the group and took the title as its new "maknae" which was previously held by fellow member Nana who was a year older than her.

In June 2010, she and her fellow After School members Raina and Nana formed a sub-unit named Orange Caramel and released their first mini-album titled "Magic Girl". The title track of the album was a hit in South Korea due to its dance and various celebrities have parodied it on TV.

A number of people have also uploaded videos on YouTube dancing to the song. This made the sub-unit a success. In September 2010, she was briefly part of the SBS variety show Running Man (런닝맨).

On January 6, 2012 it was announced that Lizzy and MBLAQ Lee Joon would become a dance couple for the MBC Lunar New Year special Pit-a-Pat Shake!, and on January 24 the episode in which they performend their acrobatic dance routine was broadcast.

On November, 2012 Lizzy was cast on the MBC weekend drama Rascal Sons as 'Yuri'.

On February, 2013 Lizzy became the model for the make up brand 'Kiss me'.

After School and Orange Caramel member Lizzy will be making her big screen debut through the upcoming movie “Today’s Love.” According to a movie industry official on August 1, Lizzy has confirmed her casting in the movie “Today’s Love,” and recently joined the rest of the cast and crew on set.

The movie’s cast lineup consists of actor and singer Lee Seung Gi, actress Moon Chae Won, former announcer Park Eun Ji, as well as former T-ara member Hwayoung. It has been reported that Lizzy will be taking on the role of ‘Min Ah,’ a bright and charming character that will breathe life into the movie’s storyline. Previously, the After School member has displayed her acting through sitcoms and dramas, such as “All My Love For You” and “Rascal Sons,” however, this will be her first time appearing on the big screen with “Today’s Love.”

To arouse curiosity for their upcoming episode, KBS 2TV's 'The Human Condition' is hinting that Lizzy may be talking about a relationship she's been in recently!

According to the show, during the recording for the episode airing tomorrow, Lizzy's group members kept throwing questions at her which resulted in the revelation of her past dating experiences.

She apparently revealed, "Just recently, a relationship I was in ended... Someone I dated in the past personally baked a cake for my birthday and even initialed my name on it, so I was touched." She also hinted that she had received a hat that said "Today's my birthday" on it, causing the members to scramble to guess when this dating period may have been.

On January 23, 2015, Lizzy made her solo debut with the trot song "Not An Easy Girl". The music video uses footage from the 1961 film adaptation of Chunhyangga, with Lizzy playing the protagonist.

On January 24, Lizzy was a special host on Show! Music Core.

On February 13, Lizzy and Park Myung Soo released their collaboration for “Goodbye PMS”. 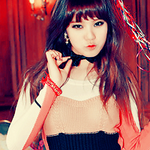